The NADO/BSE Victory Ranked Series - Summer Shirt event has started! Running through July 11, 2021. You can participate any time during those dates.

Players may compete at any participating location. Contact us at Midstate Amusements to talk about getting your bar signed up. It is never too late to start!

OVERVIEW
Locations are signed up through their NADO Franchisee (Midstate Amusement Games). Franchisees should contact NADO with a list of locations where they would like the VRS Tournament downloaded. We will then include your locations into the NADO/BSE VRS Program. NADO has exclusive rights to Bullshooter Europe events in the U.S. and Canada.

VRS (Virtual Ranked Series) is a series of promotions that allow a competition to take place regardless of the traditional or online leagues.

It is a system that can be played by anyone, at any time.

It is based on an average system in which the program takes the best games played, creates an average and then classifies the player according to their MPR / PPD.

VRS allows players to play when they want, and does not oppose a schedule, local customs, holidays or other leagues.

VRS promotions are designed so that players of any level can participate and are able to win prize.

- Starts on June 7, 2021 and end on July 11, 2021.
- This competition is designed for all levels of play
- It consists of a qualifier from 1st to 200th in which the players will be placed in a position according to the VRS MPR average that they have obtained during the entire promotion.
- Players in the winning positions in the ranking will get an exclusive Bullshooter Europe jersey.

Virtual Couples League:
- The registration period will start on August 16, 2021 and end on September 12, 2021. Players not registered during this registration period will not be able to participate in the virtual couples league.
- The league will start on September 27, 2021 until the end.
- It is a league in virtual format so the winner of each match will be determined by the average VRS MPR of each player / team at the end of the highest matchday.
- Each Match will have a duration of one week, thus giving the possibility for players to play their minimum number of games on the days and hours that suit them best.

TOP16.2:
- Starts on October 1, 2021 and end on December 31, 2021.
- It consists of 3 qualifiers similar to the Elites promotion. In this case, each qualifier will last a month.
- 3 or 4 levels of play.
- At the end of the promotion, 16 players who have obtained the most points of each level, will play in an online face-to-face chart in which the 3 finalist players will obtain a cash prize.

How to participate in VRS:

*All games are reviewed and refereed. Those players who have been detected cheating will be completely disqualified from the competition. 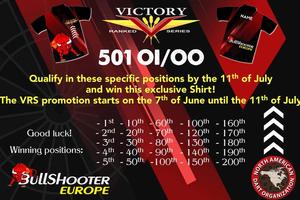